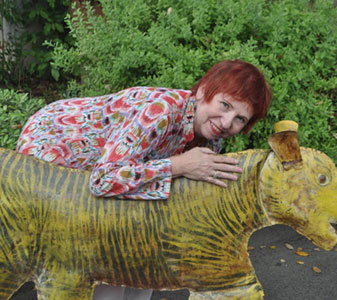 “My work has evolved from the art-to-wear textile movement of the 1970s to an exploration of the human figure. The work investigates issues of identity, mysticism and ritual. I often combine a variety of printing techniques with weaving, stitching, mosaic and collage into what I think of as ‘three-dimensional collage.”

A found object, or sometimes a found phrase or poem, will generate an idea for the artwork of Rose Kelly. She combines a variety of printing techniques with weaving, painting and drawing into what she thinks of as “three-dimensional collage.” She prefers weaving the background (often from paper she prints), using the language that relates to the piece she is planning. She then cuts the sheets of paper into strips to be used as the weft of the weaving. This fragments the words, turning them into a secret language, which looks familiar but is unreadable.

Travel is one of Rose’s major sources of inspiration. Trips to Asia, most recently Bhutan, have provided a rich source of images and ideas. Her collage, Peacefulness in a Cup of Tea, includes a drawing of a Japanese shop sign, showing a man with a big nose upon which sits a bee. His body is a wrapper from a popular Asian candy. The large red chest shown in Dowry sits in her dining room. On the central door is a painted the former owner’s entire wealth represented by her dowry jewelry.

Rose Kelly is a fourth generation San Franciscan. Another more interesting part of her genealogy, is that her many times great-grandmother was hanged as a witch in Salem, Massachusetts. One day an envelope from her mother arrived in the mail. To her surprise, when she opened it there was a copy of the death warrant from the Salem witch trials. She traced back the original documents and transcribed what remained and collaged it onto an old boned corset. The piece, entitled “Salem: Sarah Wildes,” has a long cheesecloth skirt, and floats from a rosewood chair back.

Kelly received a Bachelor of Science with Honors from University of California at Davis in 1977. In 2005, she received a Master of Art in Museum Studies from JFK University in Berkeley, California. Kelly was an artist-in-residence at Altos de Chavon, Dominican Republic in 1985. From 1994-1997, she served as California Arts Council Artist-in-Residence at the National Institute of Art and Disabilities Center in Richmond, where she taught and developed the extensive crafts curriculum. She became the center’s curator in 1997. During the summer of 1998, Kelly and her husband, sculptor, Robert Bagnasco Murray, were artists-in-residence in Hungary, where they worked on a public art project.

Kelly’s work has been exhibited in America and internationally. She is represented in the collections of the De Young Museum, San Francisco; the Alameda County Collection of Multicultural Visual Art, Oakland, CA; Gulf and Western Corp.; the Dual Language Institute, Balatonalmadi, Hungary; and private collections. 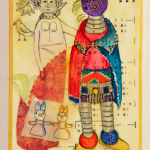