Socrates thought that the only way to learn anything was in dialogue with others, following the unpredictable twists and turns of animated conversations. Freud believed that we discover what is important to us by talking about ourselves in front of someone else, who listens attentively and doesn’t interrupt. Dane Goodman is not so confident that either method is very useful, especially when it comes to making art.

Just about everything the California artist has made over the last 40 years attests to his conviction that the best way to arrive at any knowledge worth knowing, especially when it has to do with oneself, is to figure things out for oneself—and that the quickest way to empty those discoveries of their power is to believe that they tell the whole story.

Figuring things out for yourself takes time. It requires silence. Uninterrupted hours—if not days, weeks, and months—of solitude are essential. And arriving at self-knowledge involves lots of stumbling, loads of meandering, and being ok with groping around in the dark, not knowing where you are, much less where you’re going, and, when things get really bad, what the point of it all might be—or even if there’s a point to anything. Those are the questions Dane asks himself when he goes to work, whether in the studio, which in his case is more like the workshop of a backyard tinkerer than a narrowly focused production facility, or in a pocket-size sketchbook, jotting down notions and inklings that flash across his mind’s eye whenever his surroundings perplex him.

That happens a lot; both because the world we live in is complex and befuddling, and because Dane treats his rich, inner life as if it’s part of his surroundings: not something that is his and his alone—and defines his unchanging identity—but something that needs to be explored, a space or terrain that merits his unflinching attentiveness, day in and day out. That’s why I find his art so fascinating: He doesn’t go into it with the intention of expressing his feelings or advertising his inner sentiments—so that the world might see how special and precious he is. On the contrary, Dane starts doodling with pencils and pens, and noodling around with such ordinary, everyday materials as soap, Model Magic, and wood, to discover what he really thinks and what his feeling might mean. 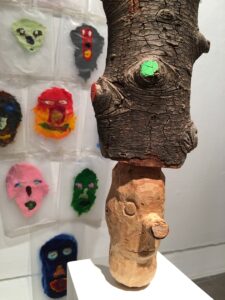 He makes art to grasp his perceptions and to perceive his capacity to process the information they bring him so that he might understand his relationship to his surroundings, both external and internal, more fully and deeply and richly. That, in turn, gives him greater agency, transforming occurrences that just seem to have happened to him into experiences in which he plays a role. And that leads him to make more art, the whole point of which is to deepen and expand his comprehension of, and connection to, everything that matters.

So, all of Dane’s works are all about him. They are personal, revealing, and intimate. They display the vulnerabilities that accompany life when it’s lived as if it’s all that matters. Yet there’s not a trace of narcissism in anything Dane has made. The characters that appear in his drawings and prints and sculptures—sentient snowmen, suffering pumpkins, crying tea kettles, and a Christmas tree trunk with a majestically coiffed head of impossibly tall hair—are certainly the vehicles Dane uses to work through his feelings and to arrive at some kind of understanding of his place in the world. But the rogue’s gallery of misfits in his works are not only about the interactive, ever-changing relationship between his inner and outer worlds. They have a life of their own. 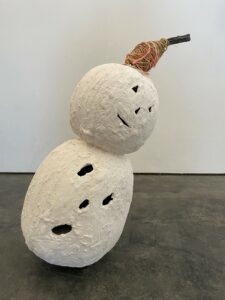 Something happens when Dane makes stuff: The results of his labors become something bigger and different from the intentions present at their point of departure. There’s a sense of letting go in all of Dane’s works: not of giving up or giving in, but of giving over—from original vision to materials and process, from plan to happenstance, from willful assertiveness to the risk of trust. And that’s when the magic happens. The characters and creatures that appear in his works become vehicles not only for Dane to discover what he knows, despite what he thinks, but for viewers—of all shapes and stripes—to start to figure things out for ourselves. 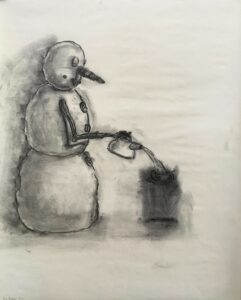 The same goes for the objects and props that populate Dane’s installations, whether abstract or representational. The physicality of their surfaces and the weight of their forms, not to mention their textures and colors and compositions, endow them with the transformative power of all handmade things—evidence that things can be different if you just get to work on them, and pay attention to what happens when you lose yourself in the process. Perhaps even more than Dane’s imagistic works, his abstract ones begin in mystery—with the sense of surprise that greets us whenever we come across something we can’t identify, its unfamiliarity derailing the routine, often-mechanical process by which we comprehend things, day in and day out. All that Dane asks is that we refrain from rejecting or dismissing whatever might be unfamiliar to us and, instead, give our curiosity a few seconds, if not an entire minute, to do its thing: engage what’s right in front of us as if there may be more to it than immediately meets the eye. 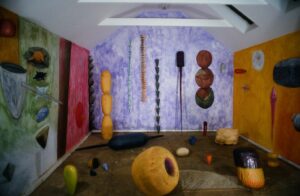 Lots of adults seem to have lost that capacity, for all kinds of reasons. But rather than dwelling on the sociological reasons behind that sad fact, Dane invites viewers from all walks of life to look at things as if the innocence of kids were still integral to our identities. His works show us, rather than merely tell us, that engaging the world openly, with the trust and unguardedness of real innocence, is far more effective than distancing ourselves from its pitfalls or standing back and criticizing its shortcomings. In Dane’s hands, innocence has far more to do with wisdom than naivety. I think of his works as a Socratic dialogue carried on in silence, where the monologue of Freudian psychotherapy opens onto shared sentiments and public convictions. Here, healing and self-discovery are two sides of the same coin, which is valuable, but even more so when it’s put into circulation, passed on, hand to hand, self to other, so on and so on. 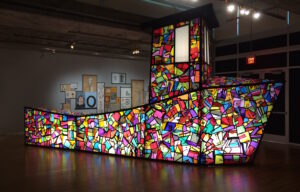 Fig. 8 Section of the “tug” exhibition, Westmont Museum of Art, 2015; in collaboration with artist, Keith Puccinelli