Despite the unfathomable magnitude and the devastating toll of the global health crisis, which continues to undermine our ways of navigating the world, the strict limits resulting from the current pandemic have proven propitious for some. From the confines of his upstate New York studio, American artist Donald Alberti has been defying these rigid boundaries, at least metaphorically, confronting the physical constraints and reaching out to the largely inaccessible global audience he addresses in his recent series “To the People of the World.” (fig. 1) A nod to Blinky Palermo’s final opus magnus, “To the People of New York City,” produced in 1976 shortly before the German artist’s untimely death, Alberti’s twenty-two trapezoidal-shaped canvases, painted in vivid, subdued, or neutral hues—cobalt blue, pyrrole red, cadmium yellow, bubblegum pink, emerald green, ochre, siena or ultramarine, white, black—form the eleven diptych comprising his recent body of work. Hanging on the walls during a zoom studio visit amidst the lockdown last spring, they beckoned like beacons, their colors and angles leading the eye every which way evocative of a mysterious nautical code. In that online viewing experience, the canvases were reduced to intriguing signs scattered on a screen, a reminder of our enforced immobility and inability to actually engage with them. In a black and white drawing (fig.2) from October 2019, a sort of study for the assorted pairs, twelve “minus/negative” canvases and ten “plus/positive,” like the poles of a battery or a magnet, adjoin in roughly a half dozen formal combinations, including both “positive” or “negative” duos and “positive/negative” couplings. Another sketch, in black felt marker and colored pencils on cardboard, further enumerates the series by adding the colors. When pressed for a formula or underlying scheme for the pairings, Alberti quotes art historian Clio Mitchell on the idea of an incomplete system “dependent on the energy of irrationality.” The artist creates works that undermine the logic imposed on a world in thrall to often inexplicable forces—a leitmotif of his practice. 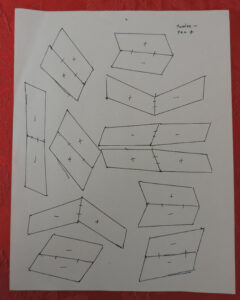 Anchored in the cyclical dimension of time, with its returns and recurrences, these recent works revisit the 1970s minimalist concepts Alberti encountered early in his career when he left art school for New York. The artist’s “To the People of the World” series, which had been brewing in his mind since the 1980s, as well as his entire project for that matter, should therefore be viewed as part of a continuum that extends from his beginnings to the here and now. Jumping back in time to those formative moments sheds light on the constancy of the artist’s pursuits. 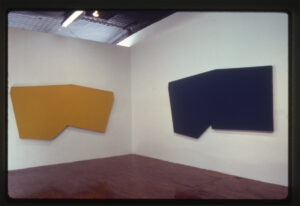 Repetition, iteration, revision, reprise, replay are inherent in Alberti’s process and its outcomes. Even one of the artist’s first exhibitions, a group show held in Richmond, Virginia (fig.3), was later reconfigured for the space at Condeso Lawler gallery in 1983 in New York City. Reviewing that show in Arts magazine, artist Stephen Westfall reveled in the way Alberti’s paintings conveyed movement—the edges of the canvases slanting upward or down in tension with the orthogonal lines of the architecture suggesting ascension or descent. The brilliant expanses of color further activate this pictorial dynamism, which the artist achieves by mining the chromatic possibilities explored and theorized by Johann Itten and Josef Albers, both of whom informed Alberti’s predilection for the monochrome, “the most advanced painting.” 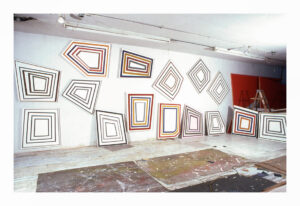 Beating a rhythm to the inexorable march of time, the seriality of Alberti’s oeuvre also underscores this sense of motion. The “Cartesian Fallacies” (fig. 4) series, executed from 1977 to 1987 and exhibited at Gilbert Brownstone & Cie in Paris in 1988, offers yet another instance of reviewing and revising a previous body of work—in this case around sixteen irregular-format canvases of various shapes and sizes the artist had begun a decade earlier by pouring pure acrylic paint onto the support, but later set aside. By applying masking tape in concentric lines that roughly follow the perimeter of each canvas, then pouring white acrylic onto the exposed painted surface, the artist transformed the previously unfinished paintings. The resulting body of work features striking pictures, whose off-beat graphic quality, painterly materiality, and titles—such as Ghost in the Machine or Ideal of Science, a reference to German philosopher Edmund Husserl’s Paris lectures—engage with and ultimately upend the meticulous rigor of op art illusionism in favor of a phenomenology of painting haunted by the specter of its history. In the 2000s, similar concerns recur in other series like “Boogie Woogie,” (fig. 5) an obvious homage to Mondrian’s iconic celebration of the dynamism of New York City, or “Visual Logic,” (fig. 6) both of which reformulate the figure and ground equation, which Alberti had deemed regressive, and fully embrace color theory. 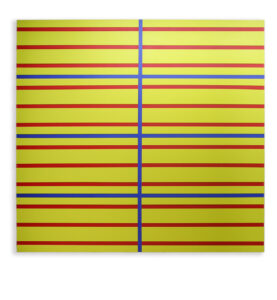 Alberti came to visual art, and to painting in particular, rather late and through the back door, so to speak. His introduction occurred when he enrolled in an art history survey course in his final year as a philosophy major. He never completed an art school degree, although he attended art classes while enrolled in graduate studies. So in some respects, Alberti considers himself a self-taught artist since he learned from attentively scrutinizing the art and the artists in his environment that captured his attention—first at the College of William and Mary in Virginia, and then Virginia Commonwealth, but also once he arrived in New York City, stimulated by its thriving art scene, sense of community, and firsthand access to both historical masterpieces and cutting-edge contemporary work. His unique and very personal trajectory no doubt accounts for the artist’s experimental and experiential approach. 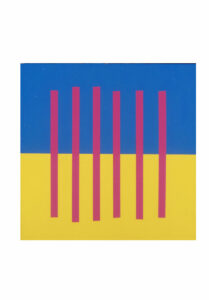 During that formative period from the mid-1970s to the mid-1980s, modernist painting opened up a vast terrain for Alberti to explore and experiment with techniques, formats, textures, chromatic effects. Contemporary painting, whose demise had been imminent yet was continually revived, and abstract painting in particular, also catalyzed a community, both IRL and virtually, who were drawn to its possibilities and the field of freedom it constituted. Expanding Alberti’s horizons in New York City and further afield in Europe, exhibitions and acquaintances nourished and confirmed the artist’s pursuits. He counted Ted Stamm and Alan Uglow among his mentors at that time and found himself in the company of peers such as Olivier Mosset, Steven Parrino, Ward Jackson, Russell Maltz, Alan Kleiman and Marcia Hafif in multiple group shows. Like Mosset and the loose network of artists practicing a type of reductive or radical abstraction in the wake of postwar artists such as Ellsworth Kelly, Donald Judd and Leon Polk Smith, Alberti envisions his canvases as objects that activate space and articulate a rapport with the viewer. Imposing and captivating, loud yet mute, the works compel their audience to enter into an embodied viewing experience. The barest trace of the artist’s presence lingers in the textural quality of paint applied by hand with brush, palette knife, or poured, and even more obliquely in some of the titles that hint at biographical detail—for instance, Puerto Limon (1979-1985) (fig. 7), a reference to the artist’s travels to Costa Rica. 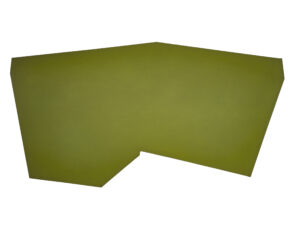 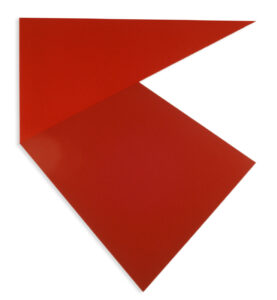 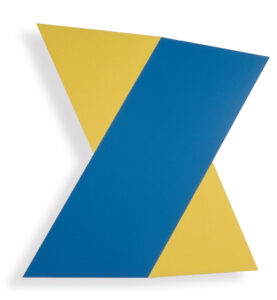 Alberti’s bold forms, exhibited transatlantically in the 1980s and 1990s from New York City to Paris, Lyon, Naples, Berlin, Bielefeld, and beyond, offer the hasty viewer a semblance of rational hard-edge geometric abstraction, yet on closer inspection betray a less formulaic process. The progression leading from monochromatic dual-canvas works, such as Untitled (1986), and Untitled (fig. 8) (1988) to the two-color trapezoidal configurations Untitled (1991) and Blue Yellow (1991), (fig. 9) which appear to overlap to form an off-kilter X, or the similarly askew triangles whose tips converge at center, Yellow on Red (2006) (fig. 10) or White on Yellow (2009), with their contrasting stripes, to the most recent series (fig.11), might suggest linear development or a predetermined program, yet actually bear witness to a more random, intuitive approach. In the end, Alberti has remained remarkably consistent in skewing logic and going against the grain to produce a vibrant alluring body of work that deliberately skirts logical solutions and eludes taking a stance. 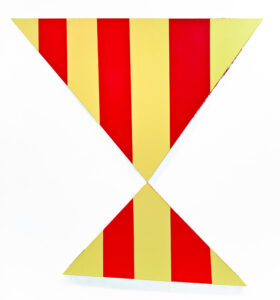 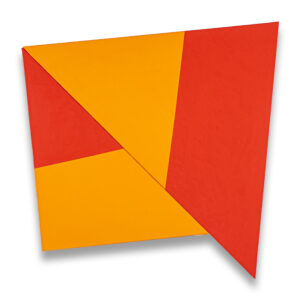