Over the course of her five-decade career, New York-based, California-born Japanese American artist Helen Oji has elaborated a remarkably diverse yet cohesive oeuvre across media—painting, sculpture, drawings, prints, installation and performance. Drawing inspiration from historical and popular Japanese arts and traditions—mythology, fairy tales, ukiyo-e prints, film, craft, fashion, zodiac—Oji injects contemporary formal and conceptual concerns with references to her heritage.  Recurring forms and motifs allude to the common themes and concerns pervading Oji’s vibrant personal universe. Her artistic trajectory unwinds like a ball of yarn, a sort of Ariadne’s thread unraveling through space and time, and a metaphor for the creative process. 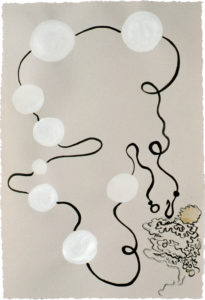 Blending European, American and Asian references in fantastical landscapes and intimate scenes associated with “Funk Figuration,” the self-referentiality of Oji’s meticulously-rendered formative works in watercolor or acrylic underlies her recent abstractions. A distillation of her early iconographic repertoire, spare graphic forms in bold colors are layered, often combining control with looser gestural handling of paint. Elemental formal relationships, such as the sinuous lines of spirals or looping figures connecting to other shapes, or the silhouettes of “spirit” animals like the black cat, appear time and again in works from the 1970s—The Intruder (1974), The Taming of the Cat (1974), Moon Child (1973)—resurfacing in the past decade—Black Cat (2012), Anticipation (2018), or in other guises, Feline Effervescence (2019), Reach (2018), Paw Paw #3 (2015). 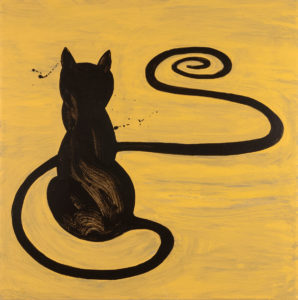 Veiled and revealed, identity is multifarious and elusive—animal, human, cosmic, genetic, performed, apparent and invisible. With their depictions and patterned decorative surfaces, masks, fans, and fabrics offer surfaces for both concealing and representing while mirrors and shadows augment this mise-en-abyme of painting. Hiding behind a checkered Bed Spread (1974), a bright-eyed young girl develops into a kimono-clad female in Woman with Fans (1974), which announces Oji’s departure from figuration to the pared down abstraction of the Kimono series, exhibited in the 1980 “New Imagists” group show at the Alternative Museum. (fig. 1) Upon arriving in New York Oji—inspired by the exploration of materials and process in Dorothea Rockeburne’s folded works—adapted the technique to create shaped paintings, collapsing a minimalist approach and the Japanese tropes of origami and kimonos to embody the equivocal, elusive qualities of representation and self. 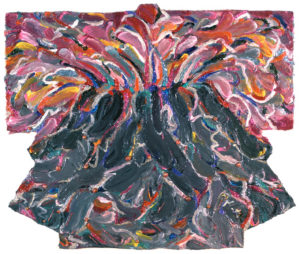 One kimono painting, titled Mt. St. Helens (1980), whose glitter-incrusted impasto incorporates actual volcanic ash, recasts the fiery eruption of the volcano that year as an exuberant explosion of color and creation, prefiguring the darker vision of Oji’s 1983-85 “Volcano” series of monumental, mural format works on paper. A reflection on the legacy of George Orwell’s prescient novel 1984 and a nod to postwar Japanese science fiction films, the somber apocalyptic landscapes in charcoal and acrylic featured in “The End of the World,” at the New Museum. 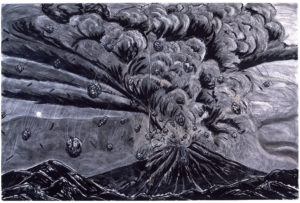 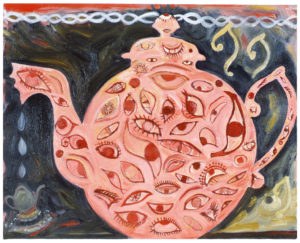 Oji manifests her embrace of expressive freedom and shifting concerns in the transition from these cataclysmic scenes of powerful natural forces to the whimsical intimate still lifes of the “Everyday Objects” series. The enigmatic symbolism and electric palette of floating martinis, teapots and cups, umbrellas, jewelry, timepieces and eyes in fanciful arrangements lead inward to the “Night Vision” series, in which cosmic imagery issues from the mind’s eye. Curvy lines and circular forms in primary hues set against solid, often neutral, grounds conjure macrocosmic and microcosmic realms invisible to the human eye. The elemental forms reminiscent of the basic building blocks of life animate the volumes of papier-mâché or pipe cleaner sculptures and infuse subsequent paintings and works on paper with a meditative Zen-like quality. Like visual haiku rendered with a pop aesthetic, Oji’s current body of work, “Animal Friends” and “Playful Abstractions,” celebrates the life-affirming creative impulse and its capacity to transform our world through humor and the joyful, lively effects of color and line. 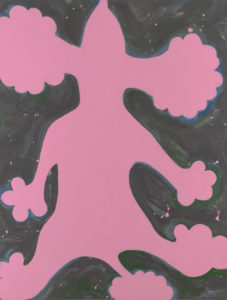