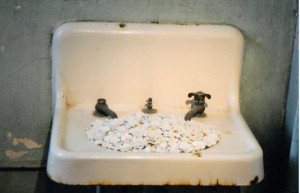 After climbing up the hill, the Book Club entered the Cell House. There, adding to the air of claustrophobia, an over-lapping sound installation played in multiple cells and was composed of poems, songs and spoken word by people who have been punished for their creative expression, including Fela Kuti and Pussy Riot. In the psychiatric wing, ILLUMINATION, another sound installation, paired Tibetan and Native American chanting, highlighting the political and cultural struggle they continue to endure. @ Large: Ai Weiwei on Alcatraz offers little interpretation, leaving visitors to draw their own conclusions regarding the artist’s intent.

Puzzling to the author was the final installations, BLOSSOM, which featured white porcelain flowers filling a bathtub, sinks and toilet in crumbling and otherwise empty cells – symbolizing perseverance or hope, perhaps.

The handout states “@Large turns Alcatraz into a space for dialogue about how we define liberty and justice, individual rights and personal responsibilities.” Although the majority of visitors were tourists who probably knew little about Ai Weiwei and his artistic vision, people were genuinely interested in the installations and discussion about the content and visuals happened between groups and among total strangers. The exhibit ends with an area where visitors can write a message on a pre-addressed postcard and those who wished to learn about future For-Site projects could sign a visitor book. Robert Hernandez, one of the Book Club members, tucked a photo of one of his politically charged paintings into the pages of the book. Maybe the For-Site Foundation will send the photo to Ai Weiwei.